AUS proudly presents the accomplished east Texas songstress Deb Porter, performing a workshop and a house concert on Thursday evening, June 20, beginning at 7 p.m. in the Parlor of the Memorial United Methodist Church. If you’re an AUS regular, you know where the MUMC is–that’s where we meet monthly. If not, come to 6100 Berkman Drive, Austin, TX 78723. (It’s east of IH35, south of 290, and also a few blocks east of Cameron.)

The workshop, “Shine when you sing with your ukulele,” will begin at 7 p.m., and the concert, in which Deb will be accompanied by uke soloist Andrew Hardin, starts at 8:45 p.m.

What’s the workshop session about? How to sing with your uke, and how to perform with your uke. Many people who start fooling around with the uke want to impress their friends with their music-making abilities. Deb will demonstrate how to find the right key in which to sing a song, how to “sell” your song with a better performance–and, Deb promises–how to yodel.

The workshop costs $25, and the concert $10. We recommend attending both for a money-saving price of $30. If you’re interested in reserving a spot for either or both of these events, send a message to austinukes@gmail.com .

Here’s some information about Deb, her accompanist, and the event:

Let Deb Porter help you build your confidence in singing, arranging and accompanying your favorite ukulele tunes.  Deb performs and teaches at festivals and workshops around the country. She has released eight CDs and three instructional DVDs.  This fun workshop will help you improve your singing, playing, and add a touch of yodeling just to liven things up. Whether you are aiming for a career in Honolulu or Hollywood, or just mustering the courage for open mic nights, Deb can help you truly enjoy the sound of your own voice!

BIO: Deb began her musical career early singing the songs learned from her Grandmother who grew up singing as she picked cotton in rural northeast Texas.  In the ’70s Deb joined the Austin music scene playing at the Checquered Flag and throughout Texas as a singer/songwriter.  In recent years Deb has settled into the folk music scene producing lovely recordings with some of Texas’ favorite musicians and teaching through workshops and DVDs.  She is a favorite teacher and performer in both the dulcimer and the ukulele worlds…  www.debbieporter.net. 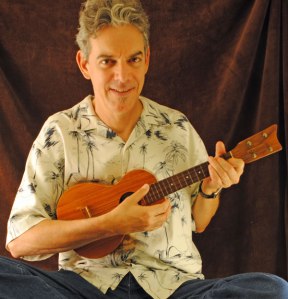 concert. Andrew Hardin began his musical career as a drummer at age eight, and began playing the guitar as a teenager living in Hawaii. Hardin played progressive country in California in the mid-seventies, major-label rock with the Dingoes from Australia on A&M Records, and hard-core blues with ex-John Lee Hooker partner Eddie Kirkland. Andrew Hardin and Tom Russell performed as an acoustic duo from the early 90’s through 2005, appearing at major music festivals in the U.S., Canada, and Europe, and joining tours with Nanci Griffith and John Prine. Hardin has appeared twice on “Late Night with David Letterman.” Hardin’s role as co-producer of the Tom Russell Band recordings of the mid-eighties led to a career producing other major and independent label acts in the U.S., Canada, and Europe.

Andrew Hardin began playing ukulele as a teenager in Hawaii during the seventies when he picked one up in the music store he was working in and couldn’t put it down. He recorded two ukulele CDs with Deb Porter playing lead on both soprano uke and tiple. For more information check out www.andrewhardin.com.