The weekend of November 22 and 23 was something special for ukulele folks. On the evenings of Nov 21 and 22 (Thursday and Friday), the Ukulele Orchestra of Great Britain was in town, pulling out their combination of rock music cover songs (with a little country mixed in) and gags from their collective hat. It was a great show–everything from a Lady Gaga song to the theme from the old Beverly Hillbillies TV show. About 50 members from the Dallas Ukulele Headquarters had come down from their own city to see 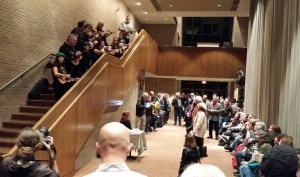 Before Friday’s show, our usual assembly of AUS members performed on a stairwell above the audience, and looking down at the audience, we saw a lot of smiles. We played some of our old favorites, like “Runaway” and “Love Potion #9.” and some newer things, too, like “Wagon Wheel.” The next morning the Austin American-Statesman ran a photo of us playing, 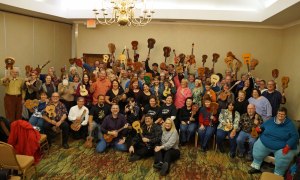 calling us the “Ukulele Society of Austin” (USA?) and that we were a “flash mob.”

We invited the UOGB members out for a pint after the show, and three of them joined us: George (the group’s leader), Dave, and Jonty. They told us that they had to be up at 5:30 a.m. to catch a flight to Philadelphia, but they stayed and chatted for awhile. 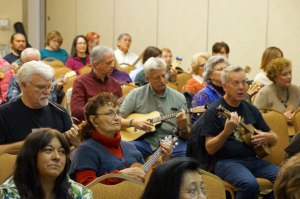 At 10 a.m. on Saturday morning, most of the DUH members had stayed overnight, and we had an interesting singalong session, with the leader of a song switching between Mark Levine of DUH and our own Bob. (With the projector and PowerPoint slides shown by Kathy and Lyda, their respective spouses.) It was a lot of fun, and gave us a chance to sing some songs we’ve never played as a group.

We’re glad we had a chance to see the UOGB, and to get together with the DUH members, 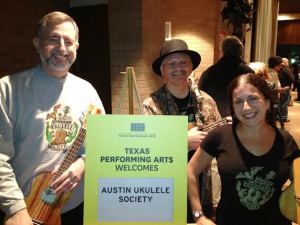 and we hope we get a chance to do it again. Oh, and here’s a picture of Bob, Jen, and me (Walter) in the lobby with a sign featuring our participation–yay, us!–in the show.