Everyone seemed to enjoy our April meeting–we had a crowd of nearly 40 people (one of the biggest groups we’ve had yet). As always, there were several new people, which is always great to see. The big hit of the evening was our new song–“Secret Agent Man.” (Some in the group thought that Bob had called it “Secret Asian Man”; um, no.) Although about 45 years old, this song sounds cool as ever, and seemed beloved even by those who weren’t born yet when it hit the charts. Great with us. 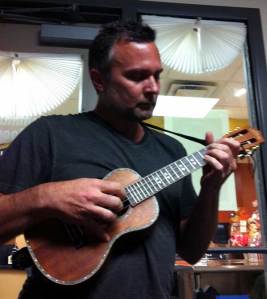 Otherwise, we sneaked into the meeting some of the rehearsal that a group of us who are performing at the Austin Family Music Fest at Pioneer Farm on Saturday, April 21, need to memorize. But they were a bunch of our usual songs–“On the Road Again,” “Eight Days a Week,” “Flamin’ Ukulele in the Sky,” etc., etc. We hope you’ll come see us!

We are going to be selling AUS T-shirts at our next meeting, by the way, as a fund-raiser for the group. Watch for the logo soon, so you can see what you’ll be getting, and they’ll cost $20 each. Watch this space.

We also had a great bunch of solo numbers this time by the Cherrywood Road duo, singing an original song, a mermaid song from Jeanette, another mermaid song from Jack, and songs by Ian (“Imagine”) and Tim (“Chattanooga Choo Choo”). A fine time was had by all. Be sure to be with us at our next meeting, at a Place Not Yet Determined, on Thursday, May 10, from 7 to 8:30 p.m. See you then!

2 thoughts on “Our April 12 meeting–lots of fun”